In this Booker Prize-winning novel, a Black neighborhood near Los Angeles is about to be wiped off the map. The man who tries to save it winds up in handcuffs, in front of the Supreme Court. 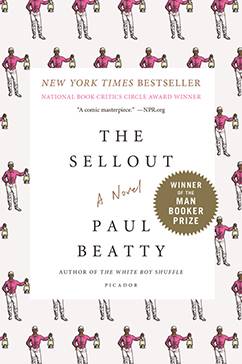 Born in Dickens, an “Agrarian Ghetto” south of LA, the narrator of The Sellout spent his childhood as the subject in racially charged psychological studies, and has since resigned himself to the fate of lower-middle-class Californians. Raised by a single father, a controversial sociologist, he is told that his father’s work will lead to a memoir that will solve their financial woes. Spoiler alert: It does not.

Fueled by the general disrepair of his hometown, the narrator sets out to right another wrong: Dickens has literally been removed from the map to save California further embarrassment. Enlisting the help of the town’s most famous resident—the last surviving Little Rascal, Hominy Jenkins—he initiates the most outrageous action conceivable: reinstating slavery and segregating the local high school.

In the words of NPR, “Too many writers shy away from any discussions of race, especially when those discussions involve humor. Beatty is not one of them.”

The Sellout is a work of comic genius that interrogates almost every received notion about American society—especially the canard that we now live in a “post-racial” era. This satiric novel is an outrageous and outrageously entertaining indictment of our time. 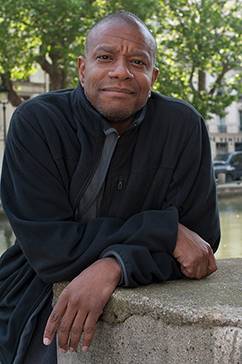 The first American to win the Man Booker Prize, Paul Beatty is a novelist and poet described by Interview magazine as “one of the shrewdest cultural commentators, and hilarious cutups, of his generation.”

Along with the Man Booker, his newest novel, The Sellout, won the National Book Critics Circle Award and the John Dos Passos Prize.

His other novels include Slumberland, Tuff, and The White Boy Shuffle. Hokum is the title of his edited volume of African-American humor.

There are two ways to join us:

Everyone can participate in the audience Q&A following the reading, and there will be a book-signing in the Olin lobby after that. For information on how to purchase a signed book if you're not on campus, see the How to Participate section of the website.

Living Writers events are free and open to the public.

Listen to a 3-question podcast

”The rage thing is not something that I really think about. Which is not to say that it’s not there, but it's not like a driving thing.” That’s Paul Beatty speaking about what compelled him to write The Sellout. Listen to this short Living Writers podcast to hear more.

Go beyond the book

Tell us what you think

We're sorry you missed our Oct. 18 faculty roundtable and discussion of The Sellout. You can listen to a recording of the first 15 minutes below. Guests included Kyle Bass, assistant professor of theater; Ed Fogerty, associate professor of political science; and Mel Watkins ‘62, former NEH professor of the humanities in the English department, author of On the Real Side: A History of African American Comedy.

That’s the problem with history, we like to think it’s a book—that we can turn the page and move the fuck on. But history isn’t the paper it’s printed on. It’s memory, and memory is time, emotions, and song. History is the things that stay with you.