How well do we really know the people we love? What’s the best use of the time we have left on Earth? Is there any reason not to ask a nurse you just met to surgically remove a troublesome fatty tumor so you can feed it to a snapping turtle? 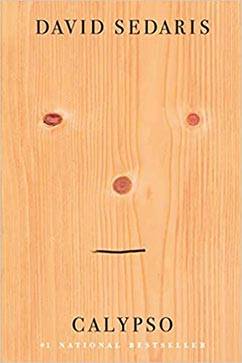 Calypso is shot through with the hilarious cynicism and close observations of the human condition that animated David Sedaris’s previous nine books.

This time, however, Mr. Sedaris looks backward in order to confront the present reality of late middle age. For him, the clock seems to be ticking as never before. From an essay about the merits of Romanian curse words to an account of feeding his own fatty tumor to a turtle, Sedaris never fails to draw laughs.

Questions of family haunt even the most lighthearted pieces in the book: How well do we really know the people we love? How do we forgive them, and ourselves, for the occasional transgression or spell of bad temper? How should we spend the time we have left?

David Sedaris’s 10th book will make you laugh and it will break your heart. Also, his virtual appearance at Colgate on Oct. 8 is the only event he’s planned for the fall.

David Sedaris is an American humorist and bestselling author of what the Guardian calls “wry, sidelong diary essays.”

His latest book, Calypso, was a New York Times bestseller and a Washington Post Best Book of the Year, and the audiobook was nominated for a 2019 Grammy in the Best Spoken Word Album category.

His work appears frequently in the New Yorker and has been reprinted in The Best American Essays.

He’s the winner of the Terry Southern Prize for Humor as well as the Medal for Spoken Language from the American Academy of Arts and Letters. He lives in West Sussex, England.

CJ Hauser teaches creative writing and literature at Colgate University. She is the author of the novels Family of Origin and The From-Aways as well as the essay “The Crane Wife.” Her writing has appeared in The Paris Review, Tin House, Narrative Magazine, TriQuarterly, Esquire, The Kenyon Review, and The Guardian. She holds an MFA in fiction from Brooklyn College and a PhD in Creative Writing from Florida State University.

Tell us what you think about Calypso

I was at an Italian restaurant in Melbourne, listening as a woman named Lesley talked about her housekeeper, an immigrant to Australia who earlier that day had cleaned the bathroom countertops with a bottle of very expensive acne medication: ‘She’s afraid of the vacuum cleaner and can’t read or write a word of English, but other than that she’s marvelous.’

Living Writers is put on by the Department of English at Colgate University with generous support from the Olive B. O'Connor Fund as well as the President and Provost/Dean of the Faculty.