Hucks, a nationally regarded scholar of American religious history and Africana studies, has returned to her alma mater as the university's provost and dean of the faculty. 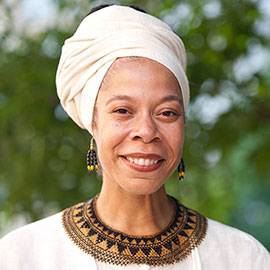 Previously, Hucks was the inaugural chair of Davidson College’s Africana studies department, overseeing all aspects of the department’s development. Prior to joining the Davidson faculty in 2014, Hucks spent more than 15 years at Haverford College, where she rose from assistant professor to professor and served, on multiple occasions, as chair of the Department of Religion. She also directed Haverford’s Bi-College Africana Studies Program with Bryn Mawr College; chaired a presidential working group on diversity initiatives; served on the Educational Policy Committee, which oversees new academic initiatives and establishes curriculum requirements; was the faculty coordinator for the Mellon Mays Undergraduate Fellowship; and was elected as a faculty representative to the college’s tenure and promotion advisory committee.

As an undergraduate at Colgate, Hucks was awarded a George W. Cobb ’94 fellowship by former President George D. Langdon Jr. and was inducted into the Konosioni Senior Honor Society. Colgate University also awarded her a master’s in religious studies (with distinction) in 1990. She earned a second master of arts in 1995 and a PhD from Harvard University in 1998 in religious studies, with a scholarly focus on the religions of Africa and the Americas.